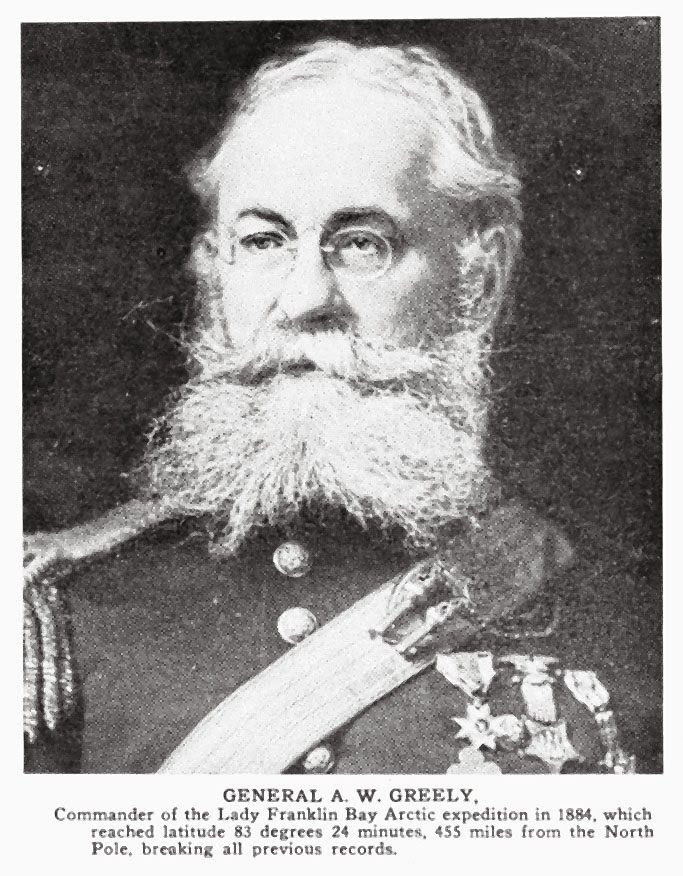 By GENERAL A. W. GREELY

Among the many explorations of the unknown regions in recent centuries, none have been more fascinating and engrossing than those for discovery within the polar cir­cles. Despite man's utmost endeavors a veil of mystery has hitherto enveloped the immediate vicinity of both geographical poles. In consequence there have been of­fered to the world various hypotheses. Some declare that they are located on an ice-clad ocean, others that they are -on glacier-covered plateaus. Again the polar regions are declared to be the abodes of great herds of polar and hibernating animals, while their opponents assert that even the white polar bear shuns the highest latitudes. While for the most part the polar countries are believed to be uninhabited, except in the lower parts of the Arctic circle, there are those who have thought it possible that there are habitable areas, where unknown tribes and strange peoples, live, far separated from the rest of the world.

These and kindred polar topics have, for the past four centuries, engaged the attention of the learned and the adventurous, of the scientist and the man of imagination. From time to time there have appeared volumes describ­ing not only the actual inhabitants of the Arctic circle, but also fanciful or semi-serious accounts of imaginary tribes. Indeed there have been so-called scientific books by American authors that argued the non-existence of either a North or South Pole, and asserted that within the polar circles the surface of the earth curves gradually inwards, and that on this interior surface dwell nations as on the outer surface.

For these and other reasons the production from time to time of summaries of polar voyages and explorations are most valuable, as tending to keep alive in the rising generation that interest in the mysterious and wonderful in nature, as well as in adventurous action, which the Polar World peculiarly presents.

The most distinctive feature of polar exploration is not generally recognized, that is its entire disinterestedness. From its earlier phases of voyages to foster commercial intercourse, to stimulate and make more profitable trade relations, by bringing China and the Orient in quick communication with the marts of Europe, polar explorations have passed to higher planes and are now confined to scientific and geographical researches, offering no immediate benefits and free from lure of gain or other aspects of materialism. While with increasing rarity polar work is attended by disastrous losses of life, it has that stimulus to adventurous action, to heroic endurance, and to a spirit of noble endeavor that makes it attractive to hearts and minds which yearn for something beyond the commonplace to stir their pulses.

Nor have polar discoveries been devoid of practical benefits to the world. Bering's voyage led to the discovery of Alaska, which now produces annually more than thirty millions of weath for the United States. Hudson's early Spitzbergen voyages opened up whale fisheries through which the world has profited to the amount of about seven hundred millions of dollars. Barren of attractions as has been Spitzbergen to the tourist visitor, it is now of such commercial importance that its ownership is to be the subject of international conference.

Polar work has had its tragedies and calamities as well as its triumphs and successes. Scores of books have been written on voyages relating to the Northwest Passage, in attempting which Sir John Franklin and one hundred and twenty-eight other souls perished. Their ships were last seen moored to an iceberg in Baffin Bay, and thereafter there have been found no records later than those reciting the abandonment of their vessels, beset in ice northwest of King William Land, and their retreat southwards towards Great Fish river. This unparalled polar mystery engaged the attention of the world for nearly fifteen years, until the harrowing story of its fate found at least a partial solution through the great arctic traveler McClintock.

A similar disaster in the middle of the sixteenth century befell the first extended maritime venture of England to distant seas, in the attempted discovery of the Northeast Passage. Chancellor's two ships, with an equippage of sixty-two souls, wintered on the barren shores of Russian Lapland, where the entire party perished on the dread arctic disease—scurvy. In striking contrast with Chancellor's experiences, illustrating the vast improvements in equipment and transportation, Nordenskiold made the Northeast Passage without casualty or danger.

Most fortunately England was not discouraged by this disaster, through which was opened up a lucrative Muscovite trade, but entered on a career of explorations and enterprises which incidentally led to polar expeditions on a scale never attempted by any other nation.

What stories of real life can be more thrilling to American minds than those set forth in polar annals? There are the adventures and wintering of Barents on Nova Zembla, the besetment of Weyprecht and the journey of Payer on the shores of Franz Josef Land, the three winterings of Parry in the North American archipelago, the sledge journeys of Wrangell across the Siberian Ocean, the five years of Sir John Ross in Boothia Felix and the discovery of the North Magnetic Pole, the vicissitudes of Kane and the boat journey of Hayes in the Smith Sound region, Scott among the penguins and on the ice-barrier of volcanic Antarctica, the great drift of De Long and the disaster of the Lena delta, McClure Is discovery of one Northwest Passage and the navigation of another by Amundsen, the successes and sufferings of the men of the Lady Franklin Bay expedition, the death of Hall and the miraculous drift of the Polaris crew, and many other notable voyages culminating in the great northings of Markham, Lockwood, Nansen, Cagni and the attainment of the North Pole by Cook and by Peary.

All these, and other varied experiences, bordering on the marvelous and exceeding many flights of fancy, appeal to the imagination, stimulate emulation, and cultivate an ardent appreciation of manly and heroic qualities exhibited in action.

While the wonderful journey of Shackleton to the vicinity of the South Pole has naturally excited wide-spread interest, most intense in Great Britain, the astonishing arctic episodes of 1909 have engrossed the attention of the United States, where feeling and interest have been aroused to an extent unequaled by any other news of the period.

That two Americans should have reached the North Pole independently would be most gratifying to the national pride at any time, but that such journeys should be made over separate routes and in successive years borders on the marvelous. Especial interest attaches, therefore, to their methods, routes and experiences.

Dr. F. A. Cook established in 1907 his headquarters most primitively with the Etah Eskimo some two hundred and fifty miles from the Arctic sea. He took the field in native fashion, with Eskimo assistants, and selecting a novel route traveled through regions well-known to abound in game. Attaining the North Pole with two Eskimos, April 21, 1908, he was subjected in his return to the vicissitudes and extreme dangers of a drifting polar-pack, and spent an awful winter in Jones' Sound region, whence his return in 1909 was hazardous and difficult.

Commander Peary approached the task by again establishing his ship's quarters in 1908 on the very shores of the Arctic Ocean, across whose drifting ice-pack he successfully made his journey, reaching the pole April 9, 1909. Thus he accomplished by energy and resourcefulness the great task to which he has applied himself for some twenty-three years.

from the book "Discovery of the North Pole" by Dr. Frederick A. Cook and Commander Robert E Peary USN - also other noted polar expeditions. Edited by J Martin Miller

read the whole book here
Posted by rodeime at 12:11 AM