When the first Arctic explorers starting venturing north, some five hundred years ago, in search of the supposed riches beyond the ice, they encountering numerous problems. Not the least of them being that their flimsy wooden ships kept sinking when they ran into the inevitable ice pack. 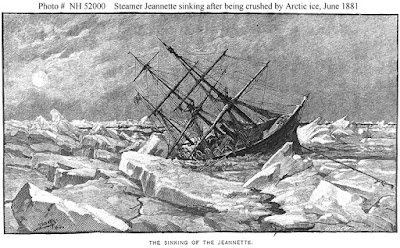 The pursuit of the fabled North West Passage from the Atlantic to the Pacific brought numerous sailors undone as they pushed deeper into the frozen wilderness above what is now Canada. In fact, the most celebrated failure, that of Sir John Franklin in 1845, saw two ships and the entire complement of 129 men disappear.

Navigating the treacherous and capricious ice pack was an immensely arduous task even for the most skilled seamen. When the ice closed in around their ship, men would go out onto the ice and physically cut it away with huge saws while another party dragged the ship through the tiny passage like mules. Any progress was painfully slow and if the currents were unfavourable, the ice would carry them backwards despite their best efforts. The other great, ever-present danger was for a ship to be completely trapped by a rapidly freezing icepack. Probably the best known example is Sir Ernest Shackleton’s 1914-16 expedition, where his ship, the Endurance, was beset for 281 days in the ice before finally being crushed by the enormous lateral pressure of the frozen ocean. Despite the use of special, ice-strengthened designs, the force of nature prevailed over man’s insignificant craft. Shackleton’s Endurance, perhaps the strongest wooden ship ever built, was only powered by a tiny 350hp steam engine - nowhere near enough power to force her 350 tonne hull through the thick Antarctic ice - ultimately dooming her to an icy grave.

Commerce, war and exploration fuelled the urgency for ships capable of not only withstanding the enormous forces of the shifting ice, but to actually break through it and create a channel other vessels could follow. Because each country had such vast Arctic coastlines, Russia, Canada and the USA were the driving forces behind this new maritime technology. Russia, however, can probably claim the first use of an icebreaker when the Pilot was used to maintain shipping lanes between St Petersburg and the nearby naval base at Kronstadt where she was built in 1864. 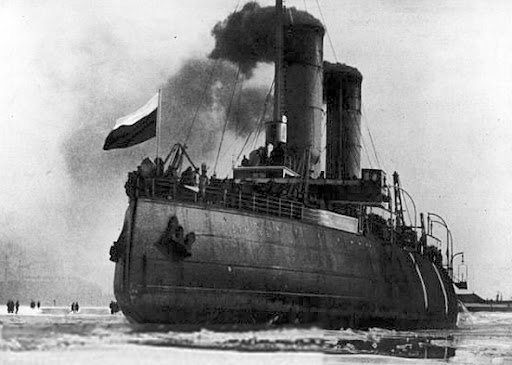 At the very end of the 19th Century, Russia introduced the world’s first true icebreaker, the Yermak. On her maiden voyage, she astounded the maritime community by immediately setting a new northernmost record for a ship when she explored to 81o 21’N on her maiden voyage to Spitsbergen in 1899. The Yermak gained hero status when she freed an icebound Russian battleship and, while on the same mission, rescued fifty stranded Finnish fisherman from an ice floe.

Convinced of their value, Russia added the Krasin, the world’s first “linear” icebreaker to her fleet. Built in Newcastle, England to Russian order in 1916, she was crucial in maintaining the Northeast Passage to the Far East along Russia’s northern coastline. She brought the icebreaker to world-wide attention again when, in 1928, she rescued General Umberto Nobile and his crew who had crashed at 82o above Spitsbergen on their failed attempt to reach the North Pole by airship. The 6,000 tonne, 100m Krasin, amazingly, is still afloat today. 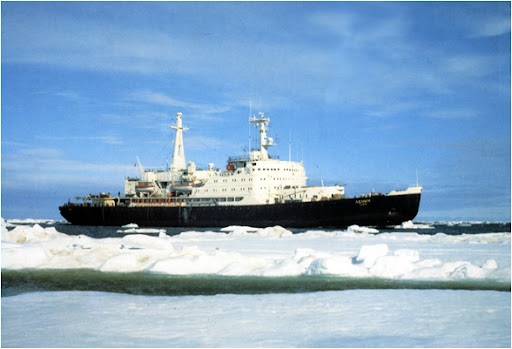 Russia continued her illustrious reputation with icebreakers when she launched the world’s first nuclear-powered surface vessel in 1957, the Lenin (pic above). She was decommissioned in 1989 after a chequered career and is currently laid up in the Russian port of Murmansk where she will apparently become a museum ship.

In 1975, Russia launched the world’s most ambitious icebreaker yet, the Arktika. She was a new class of vessel and the largest and most powerful icebreaker ever constructed. Two 160 tonne nuclear reactors power steam turbines which, in turn, drive six electric generators providing an unprecedented 75,000 hp (max) to three fixed-pitch propellers. Her displacement is 23,455 tonnes. In a impressive demonstration of her superior design and performance, the Arktika became the first surface vessel to reach the North Pole when she cut a swath through the Arctic pack ice to reach 90o N on August 17, 1977. The journey took her a little over a week from her home port of Murmansk, although she could have kept going for another five years before needing to refuel. Four sister vessels were constructed over the subsequent ten years, with the last ship, the Yamal (from the Nenets language: End of the Earth) finally launched in 1992. 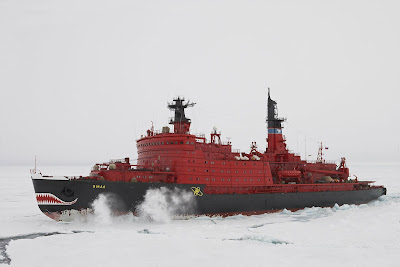 At the time of Yamal’s launch, the Russian icebreaker fleet was in disarray. Previously funded by the Soviet government, they now had to pay their own pay and, apart from regular transport and escort duties, soon began to carry Western adventurers to unheard-of destinations, including the North Pole. In a curious twist of fortune, the sudden availability of the world’s most capable fleet of icebreakers and ice-class vessels (including the conventionally powered Sorokin-class icebreakers) for free-market commercial use, has exploded the adventure travel market. Today, voyages to the far reaches of Antarctica, the fabled NorthWest Passage, the North Pole and elsewhere can be booked as easily as picking up the phone.

In 1991, Australian travel entrepreneur, Dennis Collaton, was one of the first to take such a voyage and thus recognise the possibilities.

“I walked out onto the deserted shore of the New Siberian Islands with some of the crew of the Sovetskiy Soyuz and there on the beach was the most enormous woolly mammoth tusk. No one could lift it. It was a struggle just to get it upright,” recalls Dennis. “It was then that I realised how incredibly special these remote destinations were and how privileged I was to be there.”

“You develop an enormous respect for the fragility and delicate balance of our environment when you visit these incredible lands,” continues Dennis, “and it makes you want to work just that much harder to preserve them.”

Since then, thousands of modern expeditioners have experienced the life-changing thrill of a voyage to the polar extremes of our fascinating planet aboard one of these extraordinary vessels.
Posted by rodeime at 5:36 AM