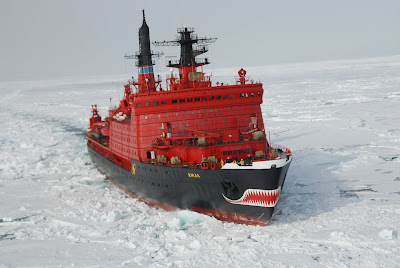 It’s 1957. The Cold War is at its peak and Russia is on a roll. Sputnik 1 launched on October 4 and shortly thereafter, Russia launched the world’s first nuclear powered surface ship, the 19,000 ton icebreaker Lenin.

Built in the Admiralty Shipyards of what was then Leningrad, the Lenin was launched on December 5, 1957.But like so many early nuclear vessels on both sides, Lenin was marred by accidents and mishaps. She was the only vessel of her class.

In February 1965, while refuelling and undergoing repairs, an operator error caused major damage to the nuclear fuel assemblies. Some sources report up to thirty fatalities. A second accident just two years later resulted in irreparable damage to her two early OK-150 reactors. The then new OK-900 naval reactors subsequently replaced them after a lengthy repair. The Lenin was finally decommissioned in 1989 reportedly due to thinning of the hull from ice friction and is currently undergoing conversion to a museum ship in Murmansk.

Like all of Russia’s icebreaking fleet, their primary task is to clear shipping lanes like the 14,000 kilometre Northern Sea Route from St Petersburg to Vladivostok, and to this effect the Lenin, and the later second generation, Arktika-class vessels (the world’s largest icebreakers) performed admirably.

Six Arktika-class vessels have been constructed, with the latest; the 50 Let Pobedy launched just this year after an interrupted building schedule that began in 1989. Inspected by President Putin himself in May this year, this latest, largest and most modern vessel will probably see the majority of service as a tourist vessel either replacing or supplementing the Yamal currently operating itineraries to the North Pole.

The privately-owned Murmansk Shipping Company’s (MSCO OJSC) who operate the nuclear fleet on behalf of the Russian Federation, states, “In the Far North and the Arctic regions of Siberia, the Northern Sea Route remains an essential factor in the economic development of the Eastern regions. There is also no alternative to the nuclear powered icebreakers providing stability and reliability of navigation in the Arctic latitudes. Moreover, recent critical events showed that only on account of the icebreakers can the inhabitants of the Arctic shoreline could get the necessary supplies so vitally important for those regions.”

According to Yury Zaitsev, an academic adviser at the Russian Academy of Engineering Sciences, Russia is committed to the nuclear Arctic fleet because the Northern Sea Route is a highly important factor in developing hydrocarbon deposits on Russia's Arctic shelf, which contains an estimated 62.5 trillion cubic meters of natural gas, nine billion metric tons of crude oil in offshore deposits and 3.5 billion metric tons of oil on shore.

“Russia must maintain its icebreaker fleet and also build special-purpose ships to transport these hydrocarbons,” said Zaitsev in a report for RIA Novosti.

The third generation of nuclear icebreakers, the Taymyr-class, was commissioned in 1988. The 151m Taymyr and Vaigach (1990) are 21,000 tons each and have 35MW of propulsive power compared to 54MW of the Arktika-class.

Did You Know? Russia’s nuclear icebreakers must use cold arctic water for cooling and cannot operate in tropical waters. Hence, the nuclear fleet will never visit Antarctica.
Posted by rodeime at 6:18 AM